I Cooked Our Own Thanksgiving This Year 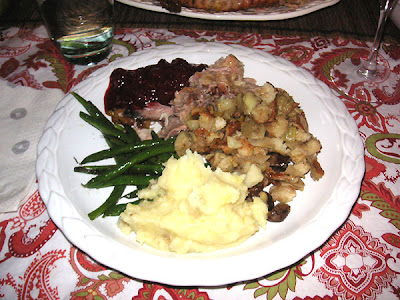 This year Thanksgiving was at my house with my own little family of 4. I had my daughter make the cranberry sauce and I made everything else; a first. I want to share what I made so I can make it again next year for maybe more people because it was delicious and it wasn’t all done out of recipes and if it was, many were modified. Typically, my mother and I have a tradition where we make Thanksgiving using recipes from the newest Bon Appetit magazine. This year, I went through all of my old issues, which I save (and are now online as well on epicurious.com ) as well as other resources that popped up. 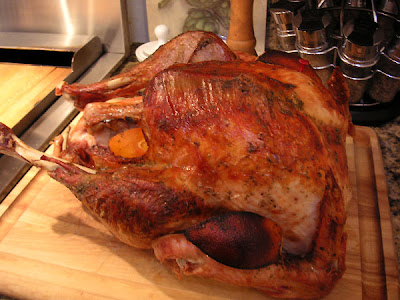 As my mother does it on the barbeque, I do as well because it delivers a moist and flavorful turkey. (I always make sure I have a gas grill big enough for a turkey when covered.) I prepared the turkey by putting it in an aluminum roaster on a roasting rack. I squeezed navel oranges on it and brushed it with melted butter. I sprinkled salt, marjoram, and tarragon on it. And then I poured about a cup of chicken broth in the bottom of the roaster and covered it tightly with aluminum foil. I grilled it on low under the turkey and med-low on the side burners for 2 hours, uncovered it, brushed it with more butter and grilled it for almost 2 more hours. This was a 14 lb. bird. It was fall of the bone tender and juicy. (I modified a recipe from Sarah Moulton) 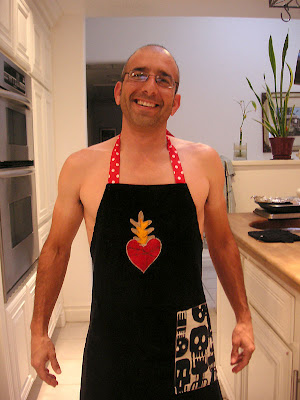 The Necessary Kitchen Tool (used for carving the turkey) 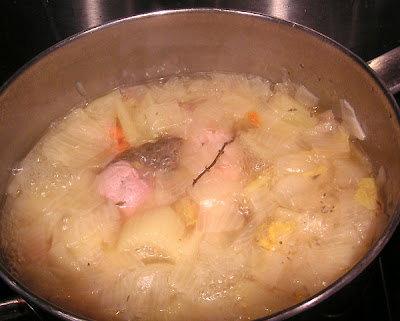 I followed a recipe from Sarah Moulton Then I was able to cut the giblets, heart and neck meat for the gravy and save the broth for cooking another meal. 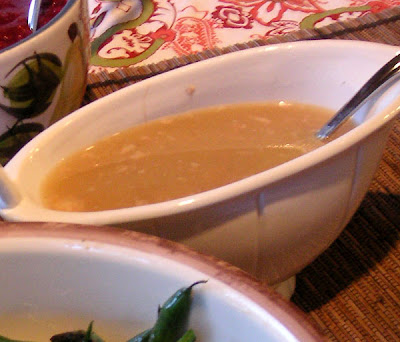 A wing and a prayer basic gravy with pan drippings, flour and wisking wildly and then I added a little sage and vermouth. And reduced it. 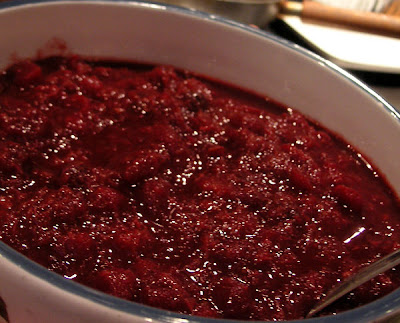 The kids LOVE cranberry sauce. They eat it for 3 meals a day after Thanksgiving so we made plenty this year. My daughter made it according to the recipe on the bag x 3 because we got 3 bags but added chopped up orange pieces and “lots of cinnamon”. She cooked the cranberries just long enough so many were still whole. Perfect! 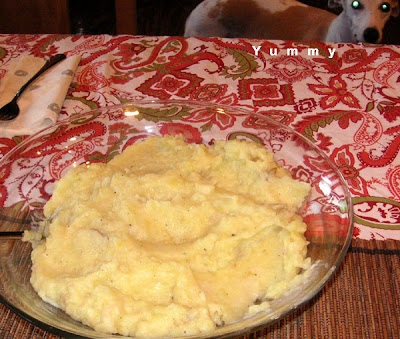 Nothing is exact in my world. So I can’t tell you exactly how many potatoes but I used about 9 medium size Yukon Gold potatoes that I half peeled and cut up in half, celery root, cleaned and cut up in pieces. Boil in salted water until tender. Drain water. Mash and add ½ stick butter, 1 Tbs minced garlic, about a cup of Half-Half and pepper and salt to taste. If you want it softer, add regular milk to your liking as you mash more. (my recipe) 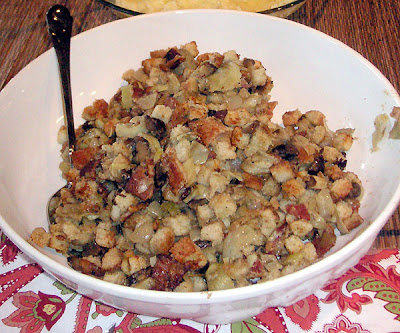 I’m not a sausage lover and I don’t know why all stuffing either has sausage in it or is made of cornbread. So I made this stuffing to my liking. And my liking includes bacon!

Considering the fact that I had to do all of my shopping like a week in advance for the most part and I was doing the cooking myself, I did have to take shortcuts. This stuffing had one of the shortcuts. Next year, it may not. I used boxed bread cubes.

The modifications. I used a package of bacon and cooked it crispy and broke it in pieces and added it to the recipe when sautéing the vegetables. I also used some of the bacon grease as a substitute for some of the olive oil for sautéing for flavor. I added a package or 5 oz of steamed chestnuts that I got at Trader Joes. I cut them up in pieces. And one box of bread cubes. Otherwise I followed the recipe as it states. 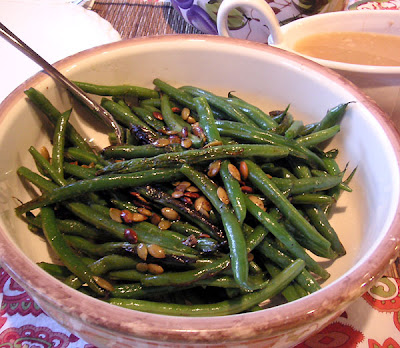 I can’t remember where I saw something similar, maybe it was on a Thanksgiving Challenge tv show or something but I thought this idea was a good one. I sautéed in olive oil, the green beans and pepitas on med-high and covered them on low for a couple of min. until the green beans softened a bit. I like when I get a little burned-ness on the green beans. I seasoned them with salt and onion powder. Easy.


We ended up going to the neighbors to share desserts. I brought a Pumpkin Tiramisu and Rocky Road Fudge. Here are the recipes.

Rocky Road Fudge (no picture, sorry. It got eaten way too fast)
I made this fudge with 1 ¾ packages of semi-sweet chocolate morsels and 1 tsp cinnamon, ¾ c chopped pecans, 1 c mini marshmallows, 1 can condensed milk. Since it’s not Christmas, I put it in a square baking pan and cut it into small cubes.

I follow this recipe always and modify the ingredients to my liking. 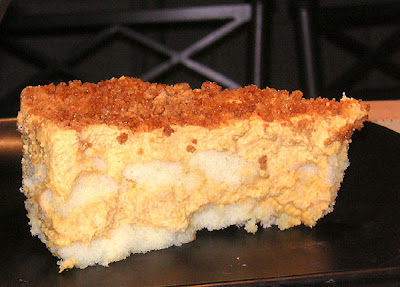 I followed this recipe to the letter. I will definitely make this every year or even everytime I want to make a tiramisu. I think the hardest part about this recipe is trying to find Amaretti cookies. World Market is your best bet besides an Italian market. Loved this. 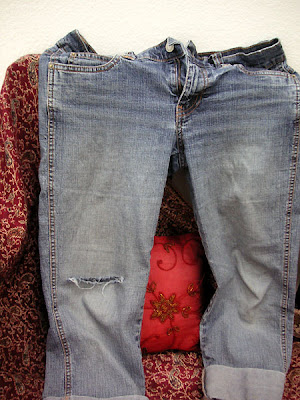 Rip...devastation. My favorite jeans ripped at the knee. It can't be. I hate buying new jeans. I hate trying on pants. I must save these. I must revive these. I must. I must use hot pink yarn! Yes. 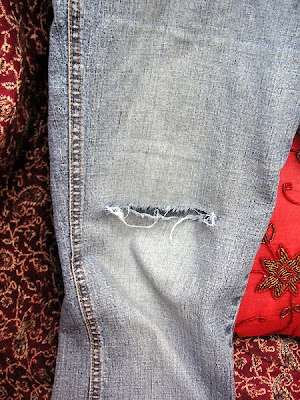 The devastation up close 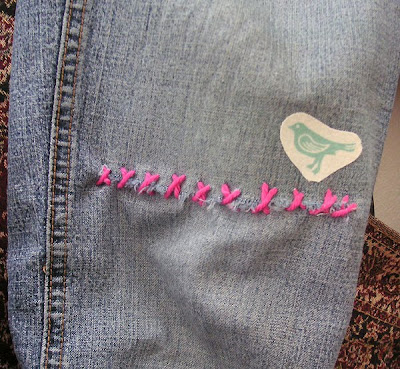 Using pink cotton yarn (Sugar 'n Cream) that you can get at any craft store and a yarn needle I did a cross stitch across. Took about a minute. Tied a knot. Then I added a little bird iron-on patch I got gratis from Polly Danger at a craft show. I like how it turned out. At least people won't be staring at my big hole. They might be staring at my questionable knee but who cares. At least I did something about the hole.
Posted by Shari at 8:16 AM No comments: 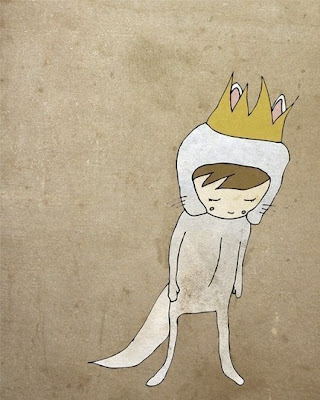 Last weekend I met my friends Carrie and Kelley at the Handmade Brigade show in Costa Mesa. Hanging out with them is always fun and they even took me out for an early birthday lunch which was so sweet. It was also really special seeing my pals Mincing Mockingbird, Frantic Meerkat, and Steph of Hearts and Laserbeams selling at HMB. I don't get to see them much and I always need a laugh or 10!

Also, I did a little bit of shopping. Not much, but a little bit. I was delighted to meet Nan Lawson . The cool thing about living in the Orange County/Los Angeles area is all of the amazing talent. I've seen Nan's work on Etsy and never thought she'd be at a small show in Orange County, and there she was inside the building, in a little corner, with her partner in crime (that's what she calls him). So I had to buy this print. I have to admit that I do have a soft spot for Max and always have (Where the Wild Things Are). And now that the movie is out I am so glad I nabbed one of these before she had none left.

You know where this is going to go in my home. And I had to make sure when I bought it. "Nan, do you have a problem if I hang this in my potty room?" I explained "It's actually my Indie art gallery room. We can sit there and appreciate it for a while. People ask to come in and check it out too. Not when we are occupying the room of course." She stated "Not a problem." Whew! So I got the print and it's hanging up now in a place of distinction. 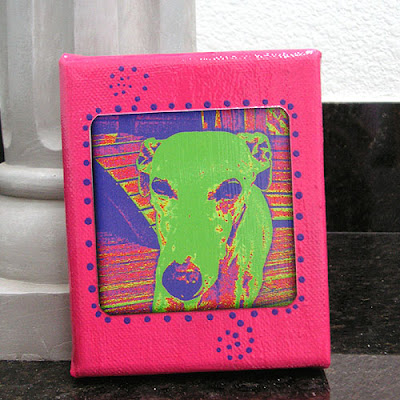 I also made this one of Summer using the techniques of my mixed media jewelry photo art pieces and it is hanging in my bathroom as well. it's 3 x 3.
Posted by Shari at 6:55 AM 1 comment: