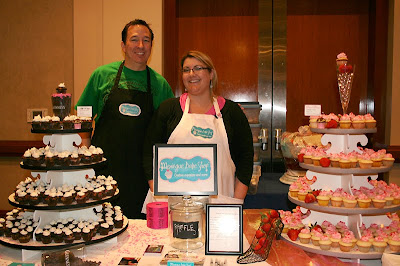 This past Saturday I was privileged to be part of Meringue Bake Shop's Team at the LA Cupcake Challenge. My friend Kristin Ausk, who is Meringue Bake Shop asked me to help her for this event. I took part in helping with picking the flavors for the cupcakes (my favorite task). As did a few other friends. Also I helped with the table display, the huge raffle giveaway prize, and the display signs. Plus I donated a Cupcake Ring for the raffle that she had at the event. At the event we all helped at the table with giving the cupcakes away, describing and hyping the cupcakes and making sure Kristin was going to get known for all of the hard work that she put in slaving over these amazing cupcakes! 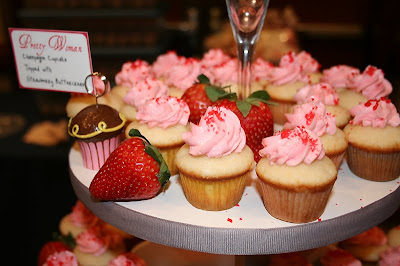 What were the flavors? First was Pretty Woman: a Champagne cupcake with a strawberry topping and Pop Rocks on the top that burst in your mouth like the bubbles do when you sip a glass of champagne. Clever! 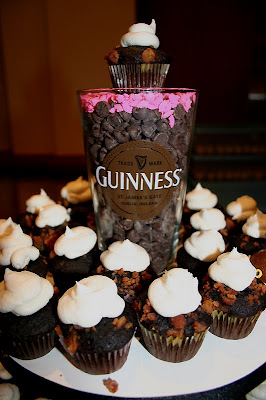 Next was Pigs on Tap: A Chocolate Stout cupcake with Bacon and a Bourbon Buttercream Topping. The Stout really makes the chocolate fudgy and yummy and the bacon gives it a little salt. Amazing! People were coming over to the table telling us they had to try it because people were telling them about it. (people were talking! Awesome). 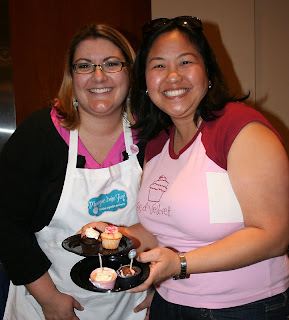 Here is Kristin finally relaxing after getting all of her cupcakes iced. This is Clara of I Heart Cuppycakes with Kristin. She is our Twitter friend and Cupcake blogger. So glad to finally meet her IRL! We also saw more friends like Elise of Cupcake Activist and others  that are camera shy like Just Jenn and @foodlibrarian but that's ok. Read Jenn's Blog post about the Challenge. It will crack you up. She is hysterically funny.

So overall, it was a fantastic event for Kristin. She got a lot of exposure and a lot of positive feedback. I think this girl is going places!!!!

Edited to add: oh and how could I forget: when we got there and got off the service elevator  we were loudly told to move aside "crowd coming through" and whoosh, inches from me walked Tim Burton and Johnny Depp. With both arms, I was carrying this massive basket for our raffle. My camera in my purse which was hanging from my right shoulder. I knew this but I could do nothing. Johnny looked at the cupcakes expressed an "ooh", looked at the basket with interest (yes Jenn, he probably saw your "Bacon Love" cards and said hi to me. I said "hi". It's all I could do. He walked by so fast. I wanted to stop him. I needed to take a picture. But he was gone. As soon as I got around the corner all I could do was Twitter it. At least Kristin's husband Lyle was there. So I know it wasn't a dream.

And. Yes he was hot. Yes he looks as good as he looks on film. Yes he isn't super tall but not short either. No I didn't smell him. There was really no bad or good smell or I would let you know. He was wearing a beret type hat and small sunglasses. I'm still melting....
Posted by Shari at 8:21 AM

GREAT re-cap Shari!! Thanks again fro all your help!

Those Pigs on Tap cupcakes look amazing. What a fantastic idea. Looks like a great day!

Had a great time hanging out with you guys! The cupcakes were great and the display was awesome! I was sick for the rest of the night, but craving more cupcakes in the morning.

Wow, now I really want to try the Pigs on Tap cupcake.

So, how did the event go?

Kristin - you are very welcome. It was different than anything I had ever done and I loved the challenge and the experience! Plus I got to see Johnny Depp and Tim Burton. Oh I have to go edit this into my post. How could I forget?!

Lorna- it was a fantastic day. Crazy, but fantastic

Elise - so glad I finally met you. I was envious that you got to taste all of them, but not the after part.

Anne-Marie - It was crazy. Super hardcore cupcake eaters and lots of loud music. Combine that with the smell of that many cupcakes and I was having a blast!

Awesome!!
Where were thos Margarita cupcakes!?!?

I don't know! Where were the Margarita cupcakes? Maybe we should make some!