A Little Bit of Italy 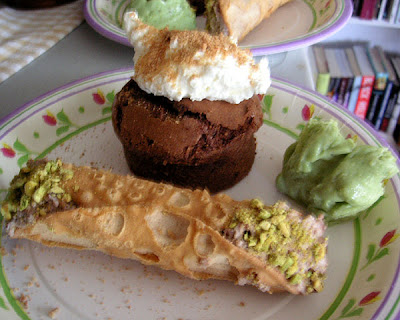 clockwise-chocolate-amaretti torte with amaretto cream, pistachio gelato, italian cannoli's
Last night I was taken to Italy with a whole group of new friends. My friend Mei-Lynn formed a cooking, or rather an eating group that each time we meet, we make something from a different country and have a meal together. I had never met any of the other 8 people there so it was really fun to meet new friends too. Some of the dishes were typical dishes like a pesto linguine, but it had a real homemade freshness of basil and intense pine nuttiness that you don't get from the jar so that was refreshing. I was in love with an eggplant caponata appetizer. It was savory and sweet and I could have eaten it all day. I'm still waiting for the recipe because we did exchange recipes. Some people didn't bring them but we'll get them online. Above was a delicious home made pistachio gelato. Here's the recipe. I'm gonna have to break out my ice cream make for this one because it was soooo worth it! 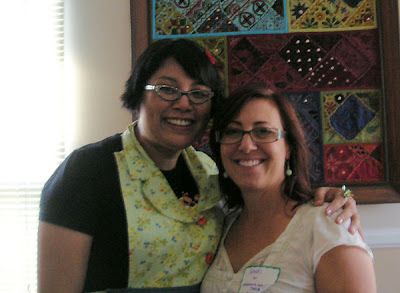 The first party was graciously hosted at Mei-Lynn's home by the sweets herself. She made the Italian Cannoli's (above) and had me in tears; they were so good! Bobby Flay bring it on!!!
I don't have the recipe for that one yet either, but when I get it, I'll post it. 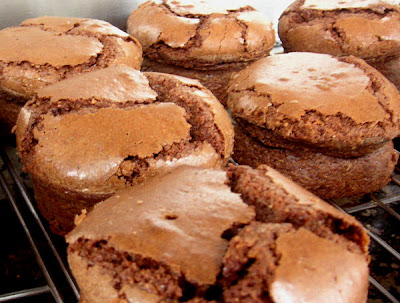 I made the chocolate-amaretti tortes and they were a hit, I have to admit. Thank goodness! Phew. I got the recipe from Bon Appetit and found it on Epicurious too. I read reviews there and ever one of them said it was an easy recipe and it turned out perfect every time. So that was the one for me. I suggest you try it as well!

So in two months we meet again for a Moroccan feast. I wonder what will become of that one. Stay tuned.
Posted by Shari at 7:57 AM

sounds like an awesome group! i LOVE cannoli too! And your tortes look great even though you suffered for their deliciousness. :)

Kristin, when I make these cannoli's I'm sharing with you!!!

ooh...yummy! what a great idea for a group!

we belonged to a gourmet club YEARS ago, and it became a bit pretentious...everyone trying to out-foodie eachother. puhlease :)

What a fun thing to do together! Great idea!