Tutorial: The Remake of a Boring Cardigan Sweater 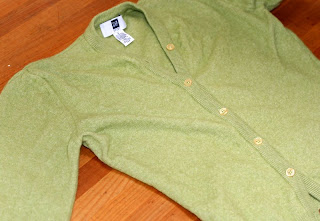 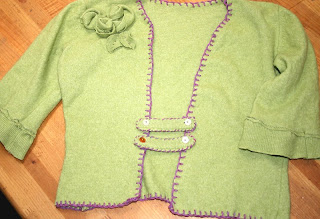 I got this Gap wool cardigan at the thrift store last year and never really liked the neckline or the fit. Since I’m not a sewer, I procrastinated on doing anything to it, and only wore it a couple of times. Finally, the other day some inspiration blew in with the northern winds and I thought to myself “what have I got to lose? The sweater cost me $5.” So I stuck the sweater in a couple of warm water washes to felt it and make it smaller. I pulled out my sewing machine and thought of a way I would minimally have to use that, and instead use mostly my needle and thread, my noggin, and my love of color and design. I also decided to enter this tutorial in the Birdie “Know-it-All Tutorial Contest to see what other's think. 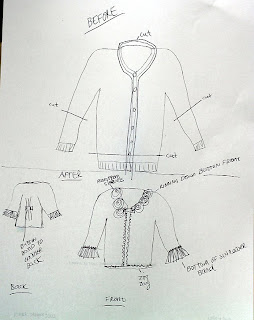 I suck at drawing. No matter how many years I took art, I never achieved the ability to make anything symmetrical on paper so don’t laugh. Typically I don’t plan things out and just wing it, but this time I needed some sort of an action plan. As you will see though, my drawing isn’t exactly like my finished project but just an inspiration for it and I’ll explain why in a minute. 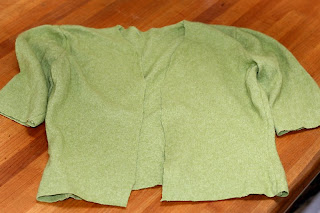 So I cut the sleeves ¾ length, the bottom band and around the neck and button band. 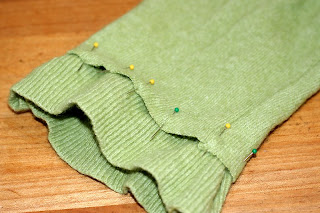 I used ½ of the bottom band for each sleeve to make them flare a bit. This is where my sewing machine came in. I zig zag stitched the sleeve edging on. 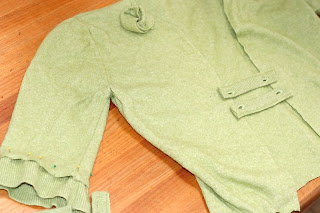 Next I started cutting out pieces for the flowers and leaves as well as the fastener bands. 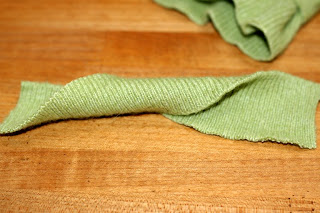 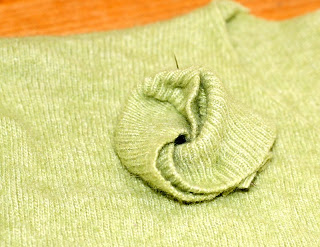 I used the sleeve portions I cut off to make the flowers. I cut across the sleeve 1 ½ inch pieces and cut that circle to open that up. I twisted that piece and rolled it from the edge around my finger and secured it with a pin.

I later sewed the back of those to secure them so that they wouldn’t unravel and then hand sewed those on with needle and thread to the sweater. 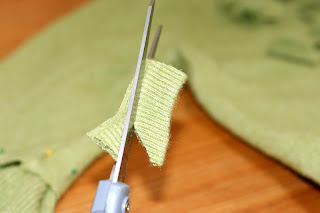 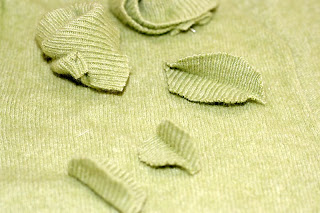 I used parts of the neckband and cut pieces about 1-2 inches long. I cut a long oblong on the edge opposite the fold so when I cut the leaf, I could open it up and there would be a leaf with a crease in the middle.

I used an unraveled thinner strand of the colored yarn to baste stitch the leaves onto the sweater down the center of the leaf.

I used 2 pieces that incorporated a buttonhole on each end. 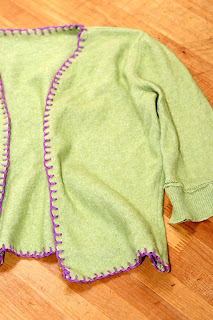 I used a basic blanket stitch with colored yarn for edging the bottom and neckline.

I used a whip stitch to go around the fastener bands.

I put 4 buttons on the sweater to attach the fastener bands. 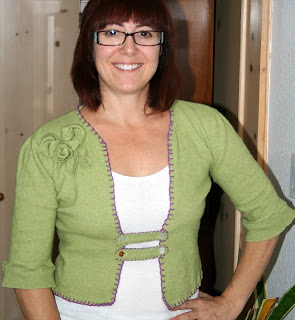 Here’s why I changed the original pattern. Once I put on the sweater I realized that it had shrunk a bit more than I realized especially since I had cut it apart. So the back gathering with a band idea wouldn’t work. Then just laying out the sweater, I thought it would be a bit much with flowers on both sides. The way the sweater fit, the fastener band could not be single and high, but would look more interesting lower and with 2.

It’s ok to use a pattern for inspiration. Once you get going on any project, things can change and so might your finished piece. And that’s ok. I can’t wait to hit the thrift for another sweater and another set of inspirations. I learned from the first one and have some ideas for another. I might even get a bit braver with my sewing machine. Maybe.

ok, what's with the "I'm not a sewer" comment?! This is so cool!!! thanks for showing us how you did it too.

Love this - I'm on the lookout for another sweater to refashion, thanks for the inspiration!

What a great idea!!! At the moment I'm a great fan of three quater sleeve sweaters. I have a couple of in my wardrobe that will be getting the sissor chop.

Stacy: I'm not a machine sewer I should say. I also don't work with fabric in any capacity anymore. Not since before my daughter was born and I sewed everything for her entire room.

Pvhike: No thank you for the inspiration to just do it!

Are you frickin' kidding me? You come over here immediately and remake all my sweaters!

Awesome! I would have worn the $5 sweater and just grumbled. :)

I have the cardigan!! It was over $50 and it never really fitted me either but I just loved the colour :)

You did an amazing job making it more trendy. I wish I had the skills to do that to my one...

This is great! I tried to "revamp" a sweater of mine also, but it's lacking. I'm so inspired by seeing what you've done. Thanks so much for sharing, I think it's just the nudge I need for completing mine!
You can see my sweater here:
http://whoopsiedaisiesdays.blogspot.com/2008/10/giveaway-time-is-here.html
I'd love any suggestions!

This is fabulous! I'll be linking to this project!

Like Jules, I would have let it stay boring and felt slightly resentful. And after you're done with Lisa's wardrobe you can come here!

Our Hands For Hope said...

That is truly incredible! And good job on fixing Carrie's thumb. I mean Carrie's handwarmer thumb. :) (I would hate for people to start contacting you for orthopedic help!)

oh so clever and very cute!
found my way to you via.....
can't remember but am happy I did because your recipes look awesome!

Hi Bonnie! Nice to see you again.
You should totally enter this in the Know it All tutorial that Giselle is putting on. I have a link on my blog. She has some wonderful prizes for the winner and this sweater is AMAZING! You make it look so easy : )