Recipe: A Twist on Pot Pie, Make it Moroccan 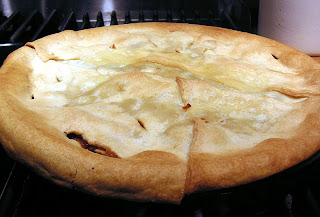 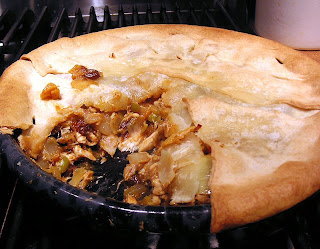 With kids doing something each night, life has become so stressful. So organization and prep is the key to decreasing my stress. I’m trying to be so organized these days and plan meals that I can make ahead or at least do the prep work for ahead of time. One dish meals are best for my sanity.

On Sundays I plan the meals and shop by Monday for the week. This past week, I roasted 2 chickens. On Monday we ate roasted chicken for dinner and had leftovers. I used that meat for this dish below and I still have the meat from the other roasted chicken that I put in the freezer for something next week. I haven’t decided what yet.

Here is a recipe I found in the Bon Appetit, Dec. 2007 issue and it sounded pretty interesting. I did make some changes because the original recipe had cumin and my husband can’t eat cumin. Also I wanted more color and texture in the dish and a little kick so I added the Tapatio sauce, apricots, marjoram, and artichokes. The pot pie was a huge hit with my family much to my huge relief. So I can now put it in my bag of tricks for another time.

We love Morocan food, surprisingly I can locate many of the mid eastern type spices in Northern Mexico. This looks truly yummy! Must try...thanks for posting this delicious recipe! (now I must find a sweater to remake, ha,ha)