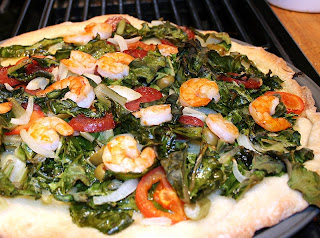 For several years, my husband has wanted his father to come to our home and teach us how to make one of the family’s favorite dishes, Coca Mallorcin. It’s a Spanish pizza but my father in law (Nestor) says that you can’t get his version anywhere, even if you spent $100. He says that in , they don’t put enough stuff on the pizza and his version is the best. After eating his version last night, I would have to agree hands down that it is the greatest pizza ever eaten. 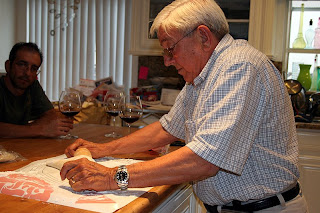 I believe one reason Nestor hasn’t made it sooner was because of the time the dough takes to make as well as just his loss of interest in cooking. I had a solution to get him over here and not worry about the dough this time. Thanks to Trader Joe’s and their refrigerated pizza dough, our first problem was solved. Next time we can make the dough from scratch. The next issue I hoped would resolve once he got started. 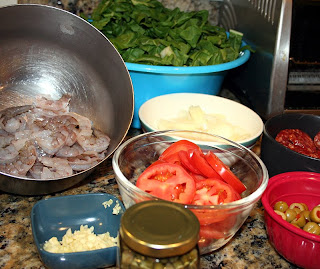 Our day started at 3 pm with slowly chopping and preparing the ingredients for the dough and at the same time listening to stories of Nestor’s younger years in Cuba as well him sharing his tricks and tips on how to make these cocas different and even venturing into the next time he comes over other dishes he will share with us. He was truly in his element and I hadn’t seen joy like that from him in a long time.

So, on to the recipe: 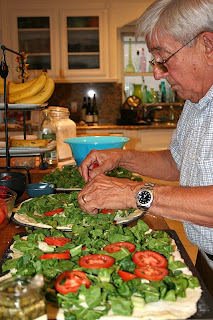 4. start adding ingredients starting with ¾ of the swiss chard and end with the remaining swiss chard
5. drizzle olive oil on the pizza
6. bake at 400 until dough is cooked on edges. Swiss chard should be a bit crispy and shrimp should be pink (about 12-15 min) 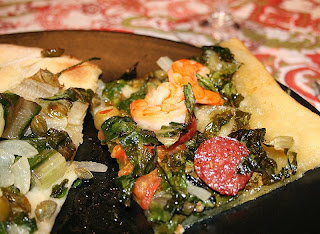 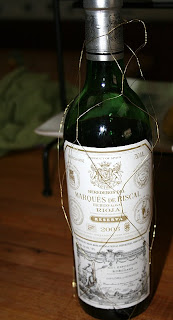 And of course don't forget a good bottle of Spanish Rioja. We drank Marques de Riscal Reserva 2003. Chin-chin.
Posted by Shari at 9:48 AM

This is such a lovely looking meal. So fresh & colorful too! I am so glad you have posted this recipe. I am sure my family would enjoy this too! Buen Provecho!

oh how wonderful! I think it's so important to keep traditions and recipes going from generation to generation. Looks heavenly too...your father-in-law is quite the cook!

Thanks for sharing the link, this does sound delish. We just threw the chard on the frozen pizza we had. However, I am going for this recipe next time. Yum!