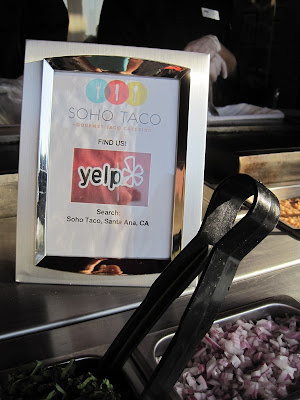 I was so fortunate to be invited last night to a dinner by my friend Kristin Ausk of Meringue Bake Shop. It was put on by Anita Lau of Mad Hungry Woman blog. If you don' t happen to know of Anita, she's a food blogger for the OC Register and Food Frenzy blog and is a world renound Yelp reviewer! I took a picture of her but her eyes were closed so I'm not posting it. I think she'd appreciate that. Lol. The setting was the Break of Dawn Restaurant in Laguna Hills which is open for breakfast and brunch, so we had it to ourselves. 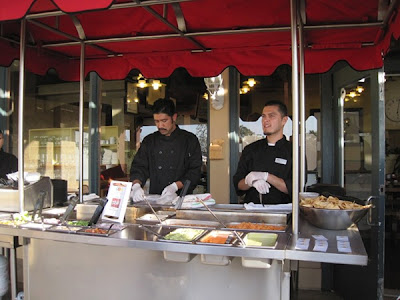 The premise of the dinner was for Anita to introduce everyone to her "Secret Lover". And much to no one's surprise, it happened to be SoHo Taco's! They are a catering company that does tacos. I kept thinking how perfect that would be to hire them for a graduation party or a corporate event. Big Train provide the beverages which were Mexican themed as well; jamaica, horchata, and then green tea. 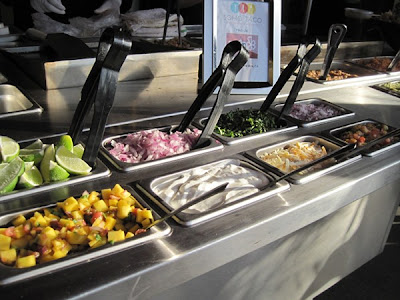 We were treated to 2 different types of tacos and sides initially. There were the chicken tacos and the shrimp tacos. We had chips, home made guacamole, rice and beans. Settling in to the serious task before us we began eating. The chicken tacos were seasoned so perfect. I'm typically not a chicken eater, except at home (That's another story), but these were my favorite of the night. I put a fresh mango salso on them which sent them over the moon with deliciousness. 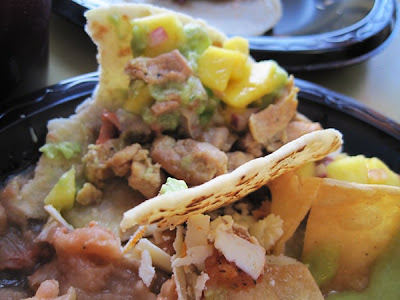 In fact I devoured that chicken taco then realized I didn't take a picture of it. The nice picture is of Kristin's tacos prior to her getting a chance to eat them. The big draw to these tacos were the fact that the tortillas were handmade, right there. They were thick and chewy. I kept thinking I could eat the tortillas alone. They would be amazing with any topping, Mexican or not. Peanut butter even! Just give me those tortillas!

After that, we were told by Rico, the publicist, of SoHo Taco, that more tacos were being prepared and that we must try them. Oh, I don't know....ok. The next course of tacos were vegetarian and carne asada. The vegetarian tacos had portobello mushrooms, onions, yellow and red peppers and spinach with a really subtle seasoning. After picking out the peppers (the only food in the world I don't eat) I was content with everything else. The carne asada tacos were good, but not my top favorite. I should have added the green sauce that Anita calls her "crack". It would have upped the flavor on those. Instead I opted for cheese and salsa.

And yes, there were still 2 more tacos to be tried, a mahi mahi taco and a carnitas taco. I couldn't. I just couldn't. But I'm sure they were delicious. People were smiling when they were eating them. I 'm still full this morning. I did get to catch up with friends I haven't seen like Priscilla Willis of She's Cookin and met a Facebook and Twitter friend IRL, Maryanne Wendt, finally!

Thanks again to Kristin for inviting me. Thanks to Anita for having this event, and thanks chef Gabe, the owner of Soho Taco for doing this, to Rico, the publicist from SoHo taco, who was so appreciative and happy to be there, his chefs, his tortilla maker and Jim Wendt of Big Train for providing beverages. Also thank you to Chef Dee of Break of Dawn Restaurant which to I hope to go to try his food another time because I hear it's just fantastic.http://madhungrywoman.com
Posted by Shari at 9:51 AM