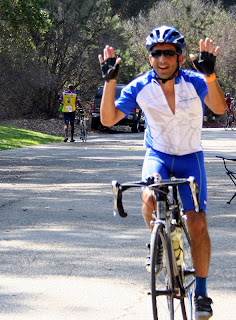 A few weeks ago I accompanied my husband to Ventura, CA. for a charity bike ride that he did with people from his company. He was to ride over 120 miles, so I had the entire day to myself to do whatever I wanted. And what I wanted was to check out Ventura. I had been to the Mission there for my kid's school project several years ago, but I didn't get the day to myself, do wander about aimlessly. So glad I did. The town itself was a mix of eateries, boutiques, thrift stores, and antique stores. Heaven on earth! There was a farmer's market going on which was packed and the town was buzzing already and it was just the mid morning. 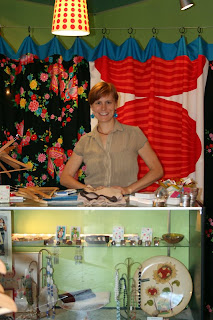 I recalled someone had posted on a forum about an indie boutique called Sassy Sally's. So I searched and searched and found it. So glad I did. The owner is Lindsay Miller who is an indie clothing designer. And her shop was filled with her goods as well as items from many indie designers I knew or had heard of. I was truly at home.
There was jewelry from Sprout Studio and I saw accessories by Kailo Chic. The shop was in a courtyard behind the famous "Peruvian Bead Shop". 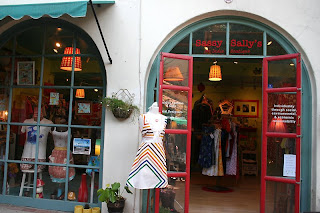 There was lots of light and color and Lindsay was just the nicest person. We chatted for quite some time and I even used her little bathroom. And I mean little. I wish I took a picture. That in itself was so cute. We discussed that many people don't even know what 'indie' is. A big part of her job has been educating the public. And from the looks of the amount of tourists that get through that town, I'm sure she's had her work cut out for her. 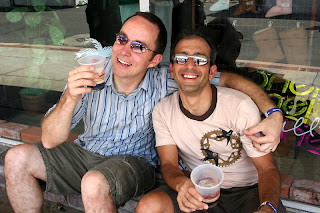 I purchased a cool T-shirt for my hubby and wouldn't ya know, I forgot the designer's name. It's not in the label and I'm really upset that I couldn't remember it. I know it started with a 'T' and had a '-' in the name. Anyone? Here's my hubby wearing his t-shirt with birds and a bike chain ring. So if you're ever in Ventura, check it out. Lindsay will make you feel warm and invited.
Posted by Shari at 8:20 AM

Was it Monsier T? You know, the spouse of Tori "Totinette?" I don't see that design on the site, though.

No, not Monsier T. But thanks for trying.

hey there! just catching up on your blog...I lived in Ventura until I was 16...so it's great to see such a cool store there :)

loving all of your posts!