When You Have Lemons - Bake Something! 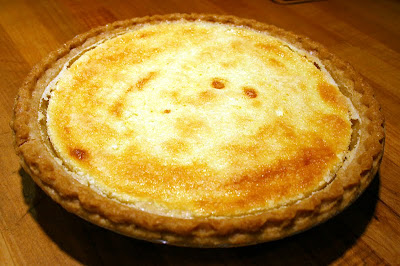 I'm definitely not the baking type but when my friend Kristin said she used the Meyer lemons I gave her from my tree and baked a Lemon Sponge Pie with them, first I drooled, then I had to know more. Well, Kristin is known for her cupcakes because she owns Meringue Bake Shop and makes the most delicious cupcakes. I had to trust her. I was a little nervous though because she's an expert baker. Turns out Kristin used this vintage recipe from the Bakespace Blog and used a frozen pie crust. Why not? These days frozen crusts are just as good as most regular homemade crusts (ducking daggers now) I assume. I can do that too! 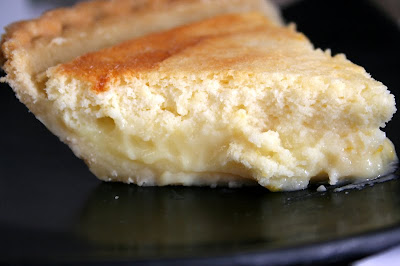 Wouldn't ya know. I sort of failed on my first attempt though. It looks ok (above). But I needed perfection so I had to make another one the next day. After all, I had the lemons and I had the will to finish off another pie. Hee hee. I learned to cream the butter and sugar better. I don't think I did that well the first time. I believe I may have just combined it. Bleh. Also I folded in the egg whites a bit less to make it more fluffy. And third, I used the convection oven instead of the regular oven since I never use it and really need to more. It was perfect! Light and fluffy and set well.
So thank you Kristin for giving me a kick in the rear to do something with my lemons other than use them on salmon. I now am a pie baking mama!
Posted by Shari at 7:48 AM

Pie baking mama! Woot!
:D Thanks for the love :) xoxo

whoa, that does look yummy! And thanks for the lemons and oranges; soo good.