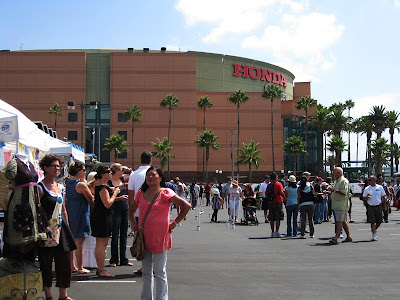 This past Saturday was the OC Foodie Fest at the Honda Center. Sold out with 8500 people, 50 food trucks, plus music, entertainment, and of course shopping with artists as part of the Patchwork Indie Arts & Crafts Festival portion of the Foodie Fest. That's where I came in. It was fun having a booth, but frustrating at times because as such a foodie as I am, I really wanted to check out each and every food truck. I did eat a Vietnamese sandwich from The Nom Nom Truck. My husband got those before the lines became outrageously long. Then my friend @OrangeCountyGal (on Twitter) who eats from food trucks most days/nights of the week, showed up at my booth with an amazing tiramisu from Vizzie Truck and then later a bbq beef sandwich from the same truck for me.  Later in the day my friend Kelly from Just Spotted brought me amazing cake donut holes from The Buttermilk Truck. I got the feeling people were mostly there to eat and only a small amount of people ended up shopping. Perhaps it was because of the long food truck lines. Maybe they were taking their food to the next line and eating it there. Also, the lack of shade on a sunny day may have caused people to eat and run and less to hang around. If there had been tables put by the vendor area, people may have hung around and shopped more. Who knows. I'm just speculating. But I was thankful for the sales that I did get. I got a lot of compliments on my designs and people really enjoyed their purchases. 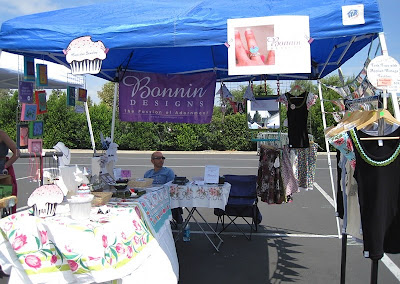 And here was my booth. And of course I dragged along my husband with the premise of "There's going to be so much food to try. Come along, you'll love it". That worked out well! 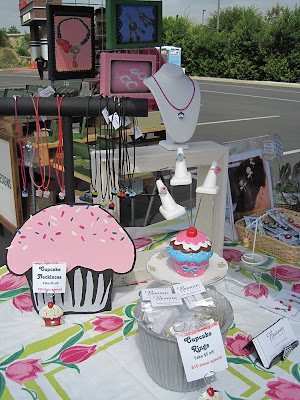 Because of the food focus of this show I thought it would be great to highlight my cupcake jewelry. I made extra fun displays and signs and it paid off. 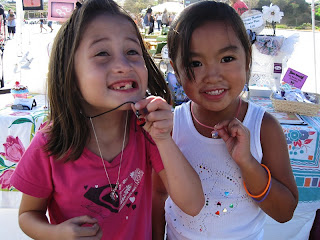 Look at these cuties happily showing off their cupcake necklaces which are also available on my website. 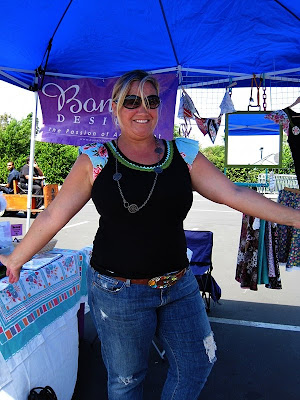 I also had my tops with vintage hankies and here's a happy customer modeling a top she purchased. 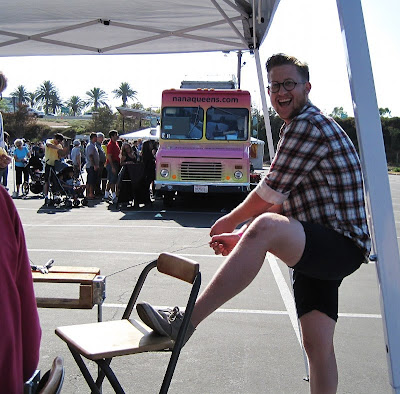 One of my favorite things about doing shows is meeting other artists. This is John of J. Holden Designs. He was next to me and here's a fun pic of him making a wire coaster holder for a customer that purchased some of his cool coasters. I really didn't have time to go around and see other vendors. So that's it for vendor pics. So that was my weekend. What was yours like?
Posted by Shari at 1:24 PM

i absolutely love the way your display came out. I REALLY wish I could have come but you know...
save that display stuff! for future ventures ;-)

I love the cupcake display, too! Did that lady come back to model her top or is that another one? Looks like the people exhibiting had a good time, too!